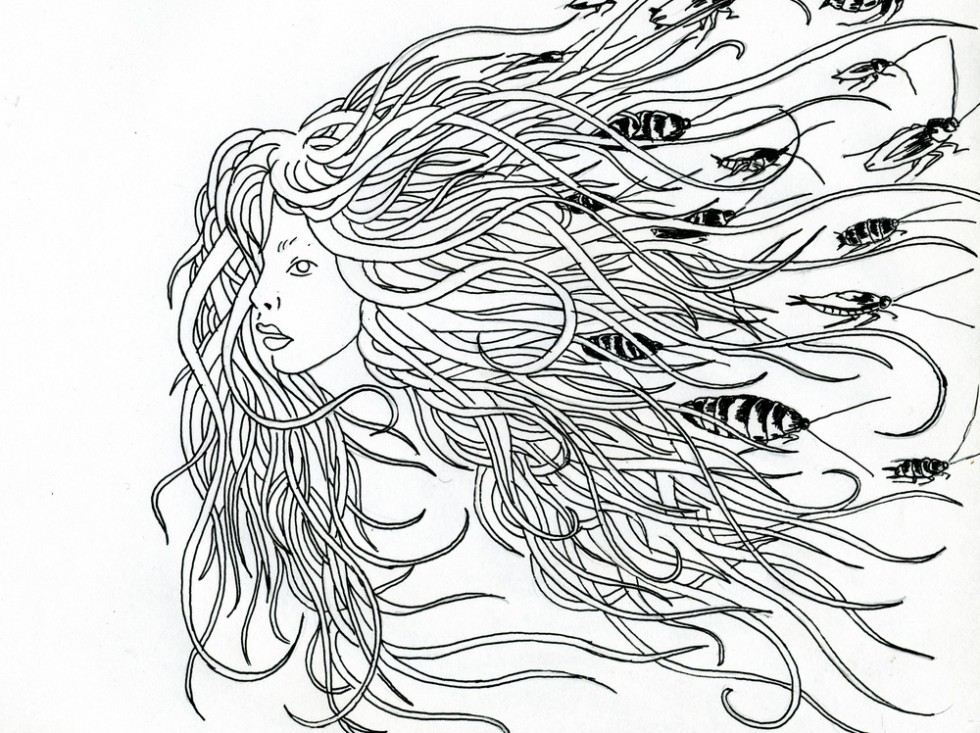 What I just witnessed will be forever burned into my brain. Permanently seared on my memory. I may never sleep again. I know for sure I will never be able to eat sushi again.  I literally feel sick to my stomach. I may die. Actually, I kind of want to die. Unfortunately for you, this is sort of like The Ring and I am cosmically obligated to share with you what I just watched. Ready? No? Ok, perfect.

WHAT AM I EVEN LOOKING AT RIGHT NOW???

Here is the scene: one girl, one man, one live fish, and one glass of milk. The girl bends over and an enema is inserted into her ass. Inside the enema is the glass of milk. She winces. After a few moments she stands up, clenching her cheeks to make sure the milk doesn’t come out before it’s good and ready. The man takes the live fish and holds open its mouth. The woman positions herself over the fish’s mouth and opens her butt. The milk comes pouring out into the fish’s mouth. Are you throwing up yet? Just wait there’s more! The man quickly takes the fish and puts his mouth on the fish’s mouth and holds the fish upside down. He drinks the ass/fish milk and smiles triumphantly to the camera. This, my friends, is Genki-Genki.

What exactly is Genki-Genki? It’s like the most underground fetish porn you could ever imagine. Also, it’s the most insane shit ever put on film. It’s so insane that I have to imagine the models participating in these horror fests are paid millions of dollars to do the things they do. The creator, Daikichi Amano, is considered by many to be a genius—an artistic monster that pushes the boundaries of the human body. I think he is a psychotic sadist who was locked in an outdoor cage as a small child.  He probably watched “2 Girls 1 Cup” while enjoying a cup of chocolate soft serve and giggling. Seriously, his shit is so fucked up that I am at a loss for words to describe it. I’ll let his work do the talking for me. Here are the titles of some of his recent films:

2)    “The Larynx that is Suffocation and Wet Skin to Attack”

And it got me thinking: there has to be weirder stuff out there. I’ve seen a woman fist herself with crunched up cockroaches thanks to Genki-Genki and I need to know more now. What other weird fetishes are out there? And who is participating in them? Here are the top 5 weirdest fetishes I found on my quest for the strangest shit on the Internet:

1)   Formicophilia is the sexual interest in being crawled upon or nibbled by small insects such as mosquitos and ants. Usually this paraphilia involves the application of insects to the genitals but hey, why stop there!

2)   Vorarephilia is a paraphilia where arousal occurs from the idea of being eaten by or eating a human. The fantasy involves the victim being swallowed either dead or alive and may or may not include digestion. Which I guess means that some vorarephiliacs are like, “I will eat the fuck out of Robert but shitting him out? YOU HAVE GONE TOO FAR SIR!” This is actually a fairly mainstream paraphilia, but it’s still super fucking weird. If you’re interested, look up Armin Meiwes, a vorarephiliac cannibal who ate a WILLING VICTIM. They were just going to have a little cooked human penis appetizer but then things took a turn for the worse. It’s worth a read….

Hey, let’s try that “All-You-Can-Eat Human Buffet” tonight. It only has 3 stars on Yelp but whatever, I’m really in the mood for people.

3)   Mechanophilia is a paraphilia where people are sexually attracted to bicycles, cars, helicopters, and planes. In some nations it’s treated as a crime and perpetrators are forced to register as sex offenders. I think it would make more sense for them to have to register as mechanics but what do I know? I’m just a necrophiliac.

Jet Blue your planes are fine as fuck but your customer service still sucks dicks.

4)   Menophilia is a sexual fetish where people become aroused by a woman’s menstrual blood. If this is your cup of tea, please contact me as I will be willing to sell you tons of used tampons every 28 days.

5)   Eproctophilia is sexual arousal from another person’s farts. Fart fetishism is a feast for all the senses—sight, sound, and smell. There are tons of websites devoted to women who love to fart and the men that love to pull their fingers. Check it out, there are tons of forums and online stores where you can buy used farty panties. Because, you know, normal sex is boring and stupid.

If you’re feeling brave, let us know what weird things you do behind closed doors, or in open spaces, or on top of trees, or with dead bodies. I’d love to know what fetishes I’ve been missing out on all these years.

Special thanks to my beautiful co-worker @Thereal_BNasty—the guy that introduced me to the beautiful world of Genki-Genki. Thanks BNasty! But also, fuck you.