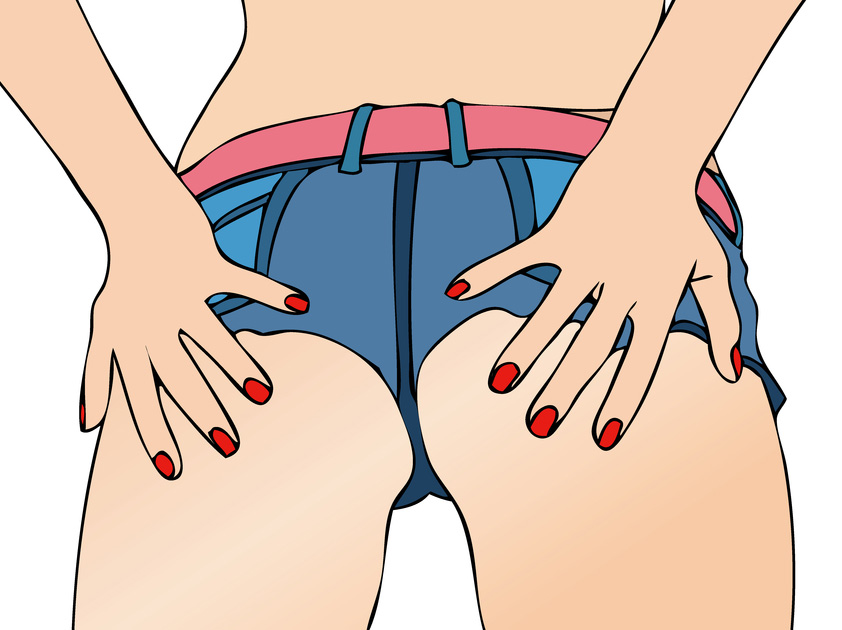 Oh, you have your period? That’s ok, I’ll just put it in your butt.

In a world where two girls happily shit in a cup and feed each other their own feces, and Japanese businessmen can buy used panties in a vending machine, it’s good to know that there are still a few normal taboos out there. There are people out there who still enjoy getting their kink on the old fashioned way: by begging their lady to take it up the butt.

My girlfriends always say, “ohmigod, no, I can’t do that! What about poop? Like, what if I poop on his dick?” Um, I don’t know if you’re aware of how the human body works but usually poop doesn’t just fall out of your ass. And if you feel like you have to take a shit before your guy sticks it in your winking rosebud then pause take a shit, wipe your butthole, and try again. I promise you, unless you’re a dirty hooker who sells her bunghole on the corner of a lower barrio, you won’t have poop shooting out of your ass like it’s on a Slip n’ Slide.

Ok, so are you over your irrational fear of shitting all over your boyfriend’s penis? Yay! Are you maybe considering allowing patrons to enter your restaurant through the backdoor? Nice! Before you allow anyone anywhere near your tokus (that’s Yiddish for bumbum—don’t say you never learned anything from me) you’re going to have to gather some necessary tools:

Now that you’re drunk and your pants are off it’s time to get your bung ready for some play. Naturally, its first instinct is to pucker up when anything goes near it. That’s where the wine comes in handy. Quickly chug half a box of Franzia before trying to insert anything into your butthole. Once you’re relaxed it’s time for your partner to begin prepping your butthole for the main event. You want to make sure everything is really lubed up. I find it best to lay on my stomach on top of a pillow with my knees slightly bent. 1) It’s a great angle for your ass and 2) your partner won’t be able to watch the tears roll down your cheeks as your reenact scenes from HBO’s “Oz”.

Your partner should begin opening up your butt chakra by slowly rubbing his fingers around the entrance to your butt. Have your partner insert his finger about half an inch into your anus and press his (or her) fingertip against the side. There are two muscles there, the inner and outer sphincter. The internal sphincter is the muscle that tenses up during anal sex. This is all in your head. Breathe in your nose and out your mouth. Enjoy this entirely new sensation that’s happening inside your body. Once you relax you’re going to start to feel warm and tingly. That’s the Franzia beginning to work its magic.

Now you’ve got a finger in your ass. Mazel tov! This is a really exciting time for you! Ready to take another one? Trust me, you’re going to want to really stretch that muscle before he slides it in. Now you’ve got two lubed fingers in your ass. You’re doing great. Are you clenching? Unclench. Are the backs of your thighs sweating uncontrollably? Mine too, but that’s a different article.  I find it helpful to rub my own clitoris while my partner is preparing my butthole to be penetrated. Ok, now you’re getting into it. You realize it doesn’t hurt. Actually, you realize it feels pretty damn good.

Once you’re ready, have your partner remove his fingers, put on a condom, lube the shit out of that thing, and gently begin to insert it into your ass. At first it’s going to feel weird. You know that feeling you have when you need to poop but you’re at work or the supermarket or on a plane and you just cannot fathom pooping near a bunch of strangers? You know when you get home and strip off all your clothes and open up Vanity Fair and get on the toilet and take a 20-minute poop that is so beautiful you want to send a picture of it to your best friend? Imagine that, but backwards. Anal sex feels like a really satisfying poop going back into your butt. It will take a moment or two to get over that feeling and when you do, woah. It’s indescribable. It feels like the moment your ecstasy pills kick in and you just feel warm and tingly all over. It’s an all over heat that makes you shudder.

I know it sounds kind of horrible to take a reverse shit, but I swear it feels so good that the pain and awkwardness of the first few minutes are worth it. Just remember, use lots of lube, lots of liquor, and take your time. I once bruised my high school boyfriend’s dick because he slammed his penis into my butt at full speed and I did a backflip off the bed, bending his penis in half in the process. I don’t know what looked worse, his purple bruised penis, or his swollen black eye. Luckily for my current lover, I’m a big ass ho, but otherwise, that one experience would have put me off butt sex forever. If you’re lucky enough to get to plunder your lady’s butt be gentle, be caring, and most importantly, buy her a nice piece of jewelry afterwards. She deserves it.