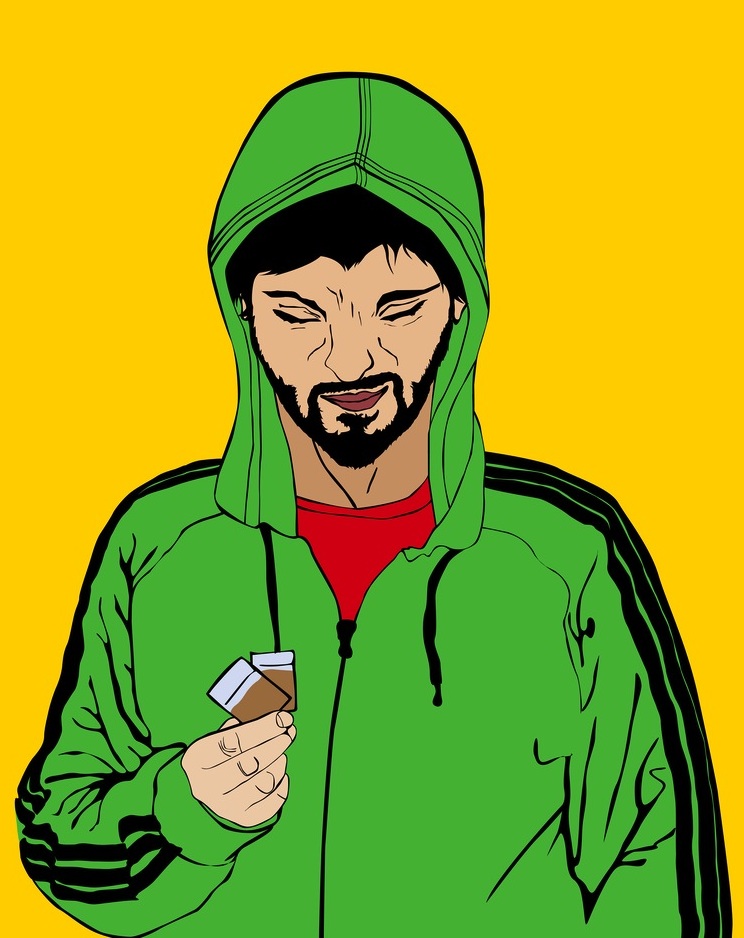 Have you ever gotten so stoned that all you want to do is curl up in the fetal position in your mom’s bed and pray for the release of sweet, sweet death? I’ve almost overdosed on marijuana on multiple occasions. Once I accidentally ate half a pan of pot brownies and ended up in the Tallahassee emergency room wearing a paper bag strapped to my face because I thought it would help me generate more oxygen. A few months after the pot brownie incident, I dropped acid on Bourbon Street in New Orleans on Halloween. I was separated from my group and wandered around the streets crying hysterically while costumed strangers with melting arms tried to calm me down. I have zero recollection of the rest of the night, but when my friends found me I was wearing fairy wings with tomato sauce on my face banging on a makeshift drum with a group of homeless teenage musicians. I told my friends that these were my family members that I had lost during the war and I wasn’t going to leave their side. I then kissed one of the homeless men on the mouth and told him to “wait for me, forever.”

This is my new family.

This is the problem with drugs. They make you do really fucking crazy things. I was looking up “drug related sex accidents” on Google recently (yeah, my Google history is going to land me on some sort of CIA watch list any day now) when I came across a story out of Columbus that made me remember why I vowed to stay away from non-medically prescribed drugs. A 41-year-old man was found naked and covered in blood by officers at a Ypsilanti Township middle school. The man was on the floor with his hands between his knees, screaming. It took six deputies to subdue the man and get him into an ambulance where they discovered he had CLAWED OFF HIS OWN SCROTUM AND PENIS WITH HIS BARE HANDS.  When the man was interviewed he told officers that he had taken some bad hallucinogenic mushrooms. How many mushrooms did this guy have to eat before he decided to literally rip off his own dick? I’ve eaten plenty of mushrooms in my lifetime and the worst thing I’ve done is throw up on a guy while we were having sex and said, “I’m sorry this boat ride is making me sea sick”…we were in his apartment in bed, approximately 50 miles from the nearest body of water.

Mixing drugs and sex is like mixing chocolate chip cookies with Nutella. It’s the most incredible thing you could imagine…to a point. You know that moment during a cookie binge where you kinda want to make yourself throw up but you’re shame spiraling so hard that you decide it’s best to just eat every cookie in the bag and draw a line through the whole sorry event? That’s what happens with drugs. You just take more and more and make increasingly poor decisions.

Me no have problem! Me can stop anytime!

Here are some of the most horrifying things that have happened to people during sex while under the influence:

1)   A heroin addicted South African couple was having sex on what they believed to be were abandoned railroad tracks when—surprise!—they discovered the train tracks were still in use. Too bad they discovered that after being run over by a freight train.

2)   A Maryland woman ended up in the hospital after her boyfriend watched too many fucking machine videos. Instead of buying a real fucking machine, the boyfriend decided a rubber penis on the end of a Saber saw would work just as well as a real drilldo (he later claimed he was stoned at the time of the invention). After inserting it into his girlfriend, he turned it on and shockingly it drilled through the rubber and into her vagina. The woman was airlifted to the hospital where she survived but probably wanted to die of humiliation.

There’s no way this could go wrong!

3)   In 1987 at the height of the cocaine boom in America a 34-year-old New Yorker injected cocaine directly into his penis. After his three-hour erection became increasingly painful he decided to check himself into the hospital. After 12 days in the hospital he developed blood clots in his legs, arms, back, chest, and genitals. Gangrene set in and doctors had to amputate his legs, nine fingers, and his penis.

Everyone at Studio 54 had cocaine in their dicks. That’s just a historical fact.

Look, I’m not here to judge. I’m just here to remind you that injecting drugs into your dick, fucking on train tracks, and building homemade sex toys while under the influence are never good ideas. Drugs are fun, sex is fun, but sometimes too much of a good thing can be really, really bad for your health.

Do you have any good drug fueled sex stories? Share them with us in the comments or tell me on Twitter @SloaneSteel.