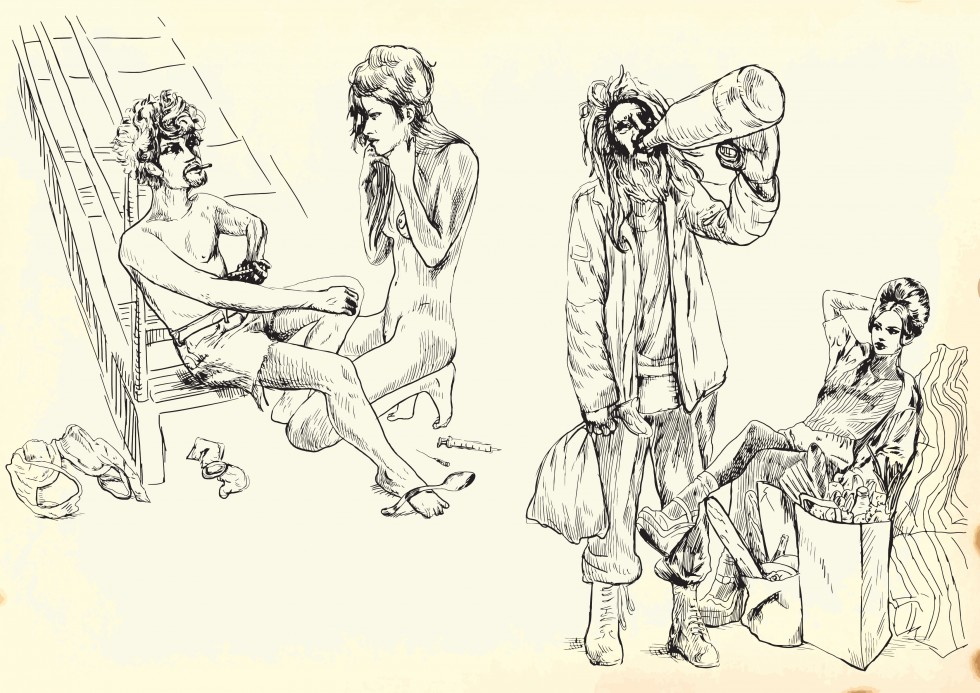 I’ve made a terrible mistake.

There is a time in every young woman’s life where she must reflect on her past and come to terms with the mistakes she’s made. Or the mistakes her vagina has made. I’ve never had a ‘type’ and my vagina is an equal opportunity employer, which means I’ve slept with almost every kind of guy out there. I’ve been sexually active since 14 (read: Daddy issues) and I’m now 26 which means I’ve had 12 years of sexual experimentation with a variety pack of partners. If you lined up all my lovers it would look like an early 90’s United Colors of Benetton ad. It’s an important right of passage for every girl to wake up in the bed of a totally inappropriate person at least once in her life. Typically that rite of passage takes place during your first semester at college. Since it’s back to school time in America I thought it would be nice to reminiscence about all the disastrous choices I’ve made regarding my reproductive organs.  I don’t want you to make the same mistakes. Let my indiscretions be a lesson to ye of loose morals and ethics. Let’s assume you’re going to be attending a typical four-year university with a large population and a reputation for wild Grecian themed parties.  If you’re an adventurous slut with loose morals you can expect to wind up regretting your night with the following guys:

At some point in your collegiate career you will meet a guy that went to one year of film school. He will spend his paycheck that he earns from the independent film store on high-end beer and French cigarettes. Inevitably, he will invite you to his house to watch a black and white foreign film where the main character is a balloon or he will make you watch every movie from the Toxic Avenger franchise. Either way, you will spend your night pretending to be a Fellini fan while drinking warm lager because that’s how he drank it during his semester abroad in Prague. After the movie ends you’ll discuss it for 30 minutes and then he will gently stroke your face with his finger indicating a scene change. As you lay your head down on his twin size bed with dirty jersey cotton sheets you look up to see a plastic replica of the Millennium Falcon hanging from his ceiling. You will only know it’s called the Millennium Falcon after you ask him what it is. He will then look at you funny and reconsider sticking his penis inside you. Even though you have terrible taste in movies and have never seen Star Wars he proceeds to have sex with you. During foreplay he will compliment your skills and say something like, “Wow, you’re so good, I need to capture this moment.” He will then take out a camera, set it on his bookshelf and press record. DO NOT LET THIS HAPPEN. He will try to assure you the red blinking light means the camera is off. This is not true. After he finishes he will light up a cig and say something like, “well, I’ve got an early call time tomorrow, sooo….”. You will sleep with him approximately five more times before he reveals his dream of becoming an award winning auteur is in order to win back his high school girlfriend whom he considers the Uma Thurman to his Quentin Tarantino. Anddddd scene.

If I have to watch one more 5-minute film school movie starring a precocious child wearing vintage binoculars I will EAT MY OWN FACE.

This is probably one of the first people you will sleep with during college. Almost everyone is in a band, wants to be in a band, is starting a band, or has a friend that is in a band. So the odds of sleeping with a musician on a college campus are a bit skewed. It is very important to note the distinction between a “real” musician and a guy that strums his guitar in the quad. Quad Strummer is the absolute worst person you can sleep with. Avoid at all costs. Second to Quad Strummer is the Party Guitarist. This is the guy who brings his guitar to every off campus party and tries to win over the ladies with terrible covers of already terrible Gavin Degraw songs or a closed eye version of “Wish You Were Here”. If you are an impressionable young woman you will be slightly wooed by the cuteness of this troubadour but STAY STRONG. His disarmingly sweet voice is a ruse to get college freshman into the back of his creepy van. Sleeping with this guy will result in Herpes Simplex and a lifelong fear of alt rock radio stations.

At least you already know what his ‘O’ face looks like before you fuck him.

After a couple rounds of truly disappointing sex with pseudo creative boys you’ve decided that you’re going to do something more worthwhile with your time. Something like taking next semester off and joining the Peace Corps! Yes! You realize you’ve always wanted to inoculate orphans in Somalia and you’re finally going to do it! To show your sincerity you begin to wear strange knit caps and volunteer at the on-campus Co-op. Your parents tell you that there is no way you’re going to Somalia and you decide to rebel against them by piercing your nose and buying blue hair chalk because that will show them! Your new friend at the co-op, Sage, tells you that his parents died on a good will mission installing windmills in Bolivia when he was eight, thus instilling in him a love of philanthropy and clean energy initatives. You curse your parents for being alive and invite Sage over for a Vegan Paleo meal of Portobello mushroom caps and cashew gravy. Sage brings over homemade alcoholic kombucha and kisses you on your eyelids. You figure you might as well sleep with him, because jeez, his parentsdied, and he is really nice and cares about ice caps. Sleeping with him is the equivalent of sleeping with a piece of overcooked spaghetti. It’s soft and slippery and not very satisfying. When it’s over Sage lights a joint and tells you that your souls are in sync. One week later you find out that Sage’s real name is Brent and his parents are alive and well in their mansion in Connecticut.

I can’t believe I gave up bacon wrapped pig shaped pork for you, asshole!

You’ve now slept your way through a veritable pu pu platter of sensitive artsy types and you’re ready for a man that won’t cry during a Subaru commercial. You think it would be a nice change of pace to be the one with small, sloped shoulders and soft hands in bed. So you start taking advantage of your free gym passes and survey the scene. You notice a hot, beefy guy staring at himself in the mirror while grunting and you decide that you want him between your legs. Now all you have to do is walk up to him, ask him to help you figure out one of the machines and touch his arms while doing a twinkly girly laugh. You will make plans to meet each other in the gym for the next week and then invite him to your dorm room to do yoga. Having sex with a jock will be a new and interesting experience. Their bodies are so large that you feel like a Polly Pocket getting fucked by a G.I. Joe. He is not very interested in you, your level of pleasure, or your desire to achieve anything resembling an orgasm. Due to his HGH intake he is incapable of lasting more than a few minutes and will cum very quickly while shuddering and saying, “YESSSSSSSSSSSSSSS OH FUCK YESSSSSSSSSSS” loud enough for your R.A. to hear. Afterwards he will stand up, slap your thigh, say “thanks buddy” and never call you again. Which is actually great because now you can go back to your regularly scheduled program of avoiding the gym at all costs.

There’s nothing gay about two muscular men who love lifting weights, sweating together and slapping each other with towels at a gymnasium.

Ladies, college is the best time you’ll ever have, guaranteed. But don’t waste your tight bodies and youthful looks on these typical douchebags. Spend your time pursuing worthwhile extra curricular activities like lezzing out on a pool table at a frat party or fucking your hot English professor. You only get a few years of reckless debauchery—make them count.